Bill and Ben only chanced a landing on earth.  Whilst on an intergalactic geocache treasure hunt, and travelling 2 light years to the final cache location, they were rather disheartened to be pipped at the post by a mere couple of weeks by an unknown geocache team, called Apollo 11.  But in the spirit of good geocaching, they left their details in the second place row and placed a new treasure for the next geocache team to find.

Wanting to take a break after an extensive journey, they decided to take a holiday at the nearest planet. That afternoon, they landed on planet earth. They loved the planet and the strange but friendly people so much, they decided to stay just that little bit longer. Recently, they travelled to Australia and have taken up residence at Marti’s house. After a day’s sightseeing of the local area, there’s always something exciting to come back home to, as Marti’s house is occupied by a family of 4 plus 2 dogs (golden retrievers) and a score of goldfish.

Rather than pay for board, Marti’s asked Bill and Ben to manage the cartoon’s Facebook Page. You can catch up on their news there. But for cartoons, click here to see their most recent cartoons.

Dave the Dot to Dot Dinosaur

Dave the Dot to Dot Dinosaur recently ripped himself free from one of Marti’s children’s dot to dot drawing books. Keen to explore his new world, he sometimes struggles with the ways of living in a 3 dimensional space and often finds himself in unfortunate situations.  However, this never dampens his enthusiasm for getting back up again and investigating his new surrounds even further.  Currently he resides at Marti’s house, along with Bill and Ben, but unlike his friendly green colleagues, he’s keen to flee the nest and find residence elsewhere. See Dave’s latest cartoons. 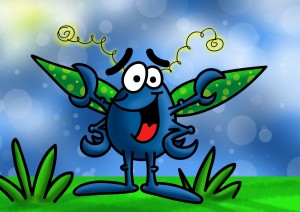 Doug the Dung Beetle is probably the happiest beetle in the whole wide world.  Unlike many of his fellow dung beetles, who dream of the day their species evolve to more complex life forms, requiring nutritional supplements from primary rather than secondary food sources, Doug actually loves his job and understands the very important role he plays in the earth’s ecosystem.  Doug takes on everything with an unquenchable level of enthusiasm.  He’s always on the hunt for fertile eating grounds and frequently visits the backyard at Marti’s house, which is occupied by 2 golden retrievers. See Doug’s latest cartoons.

Every cartoon needs some baddies, and our baddies at Just Outside the Box are evil pink aliens with purple spots and fluffy feathers. What could possibly be more evil?

To check out their antics, click here to see how wicked they really are.

The secret lives of giants

They’re big – they’re giants – but their existence must remain secret if they are to continue to live unharmed on planet earth. So when you ever come across something you can’t explain, maybe the answer is the giants! Click here to view their latest activities

If you like the sound of these characters, then subscribe to my newsletter and find out more about them.

13 Comments on “Meet the Characters”