I’m sure Dilbert has already done something like this, but didn’t have the time to trawl through all his cartoons (as much fun as that would be).

How baby aliens are born

In the wonderful words of Wiki

Put simply, where as the black hole sucks everything into it, the white hole spits it out.  When you put the two together, you have a wormhole with one end sucking, the end spitting – that’s what a scientist would consider to be perfect balance of energy in equals energy out.

Unlike our friend the black hole which we have observed in space, the white hole hasn’t and hence is only theoretical under the theory of general realtivity.

The idea of white holes were new to me. Am I the only ignorant one out here in cyber space?

What do black holes and George Clooney have in common?

Yes, the opening title has the potential to be controversial, but in fairness, it’s not having a go at dear George 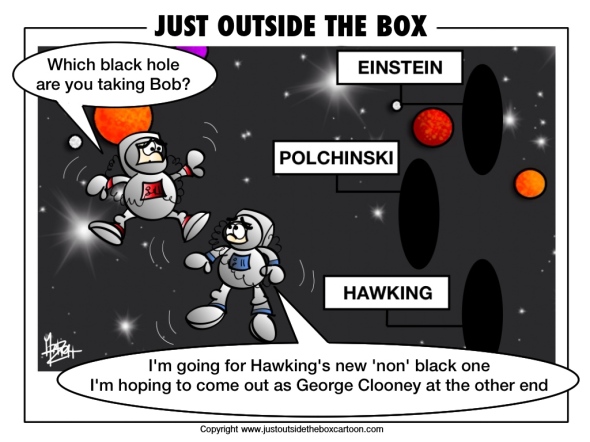 Yes, lazy cartooning where I get to use the last cartoon and add different captions.

How do you take your black holes?

I was curious to find out more, especially since my cartoons consist of quite a few black holes – What would it mean if they didn’t exist? – Should I just re-ink the black hole away?  Well, after a bit of research, I discovered they still exist, but not under the strict definition of ‘nothing is meant to escape from the evil wrath of a black hole’.  The new theory suggests that matter does escape, so hence under the strict definition, black holes don’t exist. But for the laymen such as myself, the whole imagery of a black bit of space sucking in space objects is still valid, and hence so are my drawings.

If I’ve peaked the nerd in you and you want to find out more, below is my simple mechanical engineering interpretation of black hole theory.

It all starts with asking the question ‘What happens to the astronaut who enters the black hole?’

The first possibility involves the big crush. Based on Einstein’s theory of relativity the eminent physicist Stephen Hawking helped provide a scientistic explanation of how a black hole operates. He published his theories way back in 1974, but with his latest paper, has now changed his tune – give me a minute, that is explained further on.  Once you enter and pass what’s referred to as the event horizon (the invisible boundary from which there is no return) you get stretched out like Guy Fawkes until your sockets ‘pop’, followed by a crushing within the heart of the black hole’s dense inner core.

If being squished into something too small for the naked microscope to see, then how about a bit of sizzling? This is where the second theory comes into play. Physist Joseph Polchinski conducted a thought experiment where he sent his victim off into space in search of a black hole, just to see what would happen to him (mathematically) when he entered the ominous black hole.  He worked with the laws of quantum physics (how sub atomic particles operate) and to his team’s surprise, passing the event horizon would result in a swift incineration – burnt to a crisp in an instant.  Naturally this caused a kerfuffle amongst the scientific community as it contradicted Eintein’s fundamental law of relativity.

Fast forward, to January 2014 when Stephen Hawking posted a paper proposing an alternate theory (to his previously highly acclaimed 1974 works). A softer version to the event horizon – an apparent horizon. Once entered you are temporarily suspended, before being scrambled up into undistinguishable tiny bits and pieces and then released. This scrambling of information would not be recognisable from its original source and has been described as trying to put back together a burnt piece of paper.

So there you have it – black holes made easy

Reference: too many too mention all, but this one by Nature was rather user friendly

Gosh, you gotta love those scientists. They probably had a quiet chuckle amongst themselves when they decided to create the acronym of WIMP when they came up with a possible explanation to support the theory of dark matter. These theoretical particles are huge and can’t be seen by the naked eye (or telescope for that matter).
The only way they can be ‘seen’ (they don’t absorb or emit light) is by viewing their gravitational impact on other visible objects.

Wacky scientists do it again….

…and this time, it’s the mathematical branch determining the formula to the calculate the most aesthetically pleasing Christmas tree.

A couple of students from the UK Sheffield University set upon the challenge of determining the ideal number of baubles, length of tinsel and lights necessary to decorate the picture perfect tree. The magical formulas are:

Where: h is the height of your tree in cm.

If you don’t believe me, check out the Uni site for full details, including a cool on line calculator.

So what are the exact things living inside your belly button?

Taking on the challenges ordinary people wouldn’t dare, a team of scientists wanted to find out exactly what lives in your belly button?

Not surprisingly, a whole heap of bacteria. From a measly 60 volunteers, they managed to:

…and what about the cartoon? Well, one of the volunteers was found to have bacteria only found in the soils of Japan (they had never visited Japan before). Another volunteer had bacteria typically only found in ice caps (must have a cold innie).

Gosh, I love scientists….Must be why I ‘married’ one.

Getting just a bit too close for comfort

Planet WASP 12-b (named so, as it was discovered by the UK SuperWASP team – cool, I want to be in a team with a funky name like that too) is believed to be the closest orbiting planet to its star.

So close, it’s being devoured by it. A gas planet about 1.4 times the size of Jupiter, it has a mean surface temperature of 2,200°C and completes its orbit in just 1.1 days (just the thought make me dizzy).  Due to its proximity, scientists believe that WASP 12-b is being boiled off and blown into space and creating a cloud of super heated gas around the planet.  Estimates assume it will be ‘consumed’ in the next billion years.

Is gravity keeping you down? 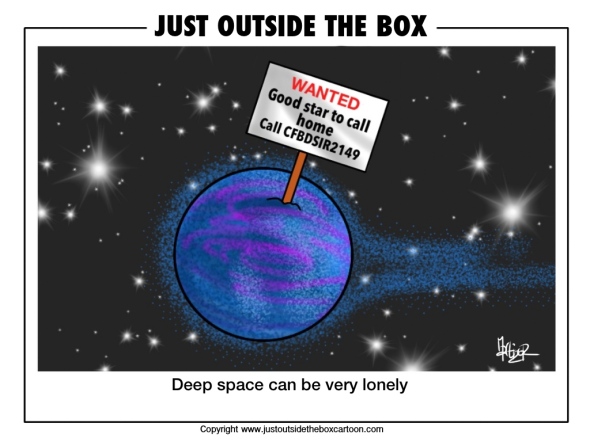 I was most excited to read in a local newspaper about the discovery of a new rogue planet affectionately called CFBDSIR2149.

I couldn’t help myself and had to do a bit of a Google hunt on those wacky scientists, who give new interstellar discoveries these rather unmemorable and uninspiring names.  Well, sure enough I found my answer and not surprisingly much, much more.

Did you know there is an organisation called the International Astronomical Union (IAU)? One of their tasks is the approval of names to newly discovered celestial bodies and their surface features.  A staged process, first you get a series of letters and numbers (typically to define the type of object and accompanying co-ordinate locations. How they give co-ordinates to a rogue planet is beyond me. I tried reading their site for nomenclature rules, but seriously, life is too short).

If the discovery is of significance you can then get a Working Group within the IUA to help in the certification of a ‘common’ name, but (a big BUT), you must follow a series of their rather unique rules.  From a logical, structured approach, they obviously felt it was appropirate to let loose when it came to naming.

Here are but a few of the rules:

What about a bit closer to home? Easy, just use the category naming table for features on planets within our solar system. Here are the crater naming requirements for some planets:

Just Outside the Box Cartoons by Marti is licensed under a Creative Commons Attribution-NonCommercial-NoDerivs 3.0 Unported License.
Based on a work at www.justoutsidetheboxcartoon.com.
Feel free to share my work for non profit purposes, but please attribute my website. Permissions beyond the scope of this license may be available at justoutsidebox@gmail.com.
Just Outside the Box Cartoon
Create a free website or blog at WordPress.com.
Loading Comments...
%d bloggers like this: